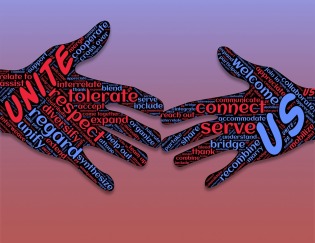 While I’m 99.9% positive I’ll never be the earth angel my mom was, I do carry a lot of her in me. For as long as I can recall, my dad has often said, “Karin is like her mother. She can lay you out and tell you about yourself, while making you feel good in the process.”  And it’s true: Of everything Mom gave me, I seemed to especially inherit her Sugar Tongue.

Now, let’s be clear: Sugar Tongue is not the same thing as Sugar Coating.

Sugar Coating is often false and can be deceptive in nature. It obscures instead of clarifies. And it usually has an ulterior motive.

Sugar Tongue is not about evading what needs to be said, nor sugarcoating one’s words so much that it’s hard to find the truth.  Rather, it’s based on The Golden Rule: Treat others the way you want to be treated. It’s about sharing honestly and directly, thoughtfully selecting one’s words and tone. And it’s about actively listening just as much as speaking.

Sugar Tongue is kind; being mean, a bully, or just plain rude don’t apply. It builds bridges of understanding; it doesn’t incite fear and division. It is respectful; you’ll never hear name calling. It listens – really listens, to understand; it doesn’t interrupt or shout over others to be heard. And it takes work. A lot of it. Along with thoughtfulness, empathy, and a huge measure of patience. But the results – appreciation and respect between folks – are worth it.

When I fail to apply Sugar Tongue when it’s needed most, I know. Quickly. It’s in the other person’s side-eye glance, folded arms, raised eyebrow, pursed lips. Tension walks in the room and brings with it feelings of disconnection – or, worse, hostility and resentment. Ultimately, I’ve found that, more often than not, Sugar Tongue is pretty effective in helping others stay open-minded and willing to listen.

I most recently watched this play out in The Messy Truth, a 3-part Facebook series created and led by author and CNN political contributor Van Jones. With a lot of courage and kindness, Van traveled to Gettysburg, PA for intimate conversations with everyday people who support different presidential candidates. You’ll recall that Gettysburg is quite historical, as the site of a famous Civil War battle. Most folks Van met are Trump supporters. And more than one mentioned the threat of another Civil War if Trump loses the election.

In talking with the participants, Van’s goal was to dig deep. Not to change their votes, but to get past all the political rhetoric and to broaden perspectives. To truly learn and share how and why people feel what they feel about the state of our country – and their place in it. With the patience of Job, he listened to, pushed back on, and encouraged folks who are polar opposites politically to think beyond their own opinions. He respectfully asked questions like: “How did it get to the point where, when you disagree with somebody, you have to be their enemy?” And, gradually, the participants started moving from political sound bites to authentically sharing their own feelings and experiences. They spoke honestly and reflectively. A few even invoked their own Sugar Tongue in the process.

The final result of these conversations? Greater willingness to understand others as much as to be understood. A lot of a-ha moments that, when the election is all over, we need each other and must co-exist peacefully. Actually seeing one another as members of the same human family and, thus, worthy of respect – despite the fact that no one’s votes will change.

Not name calling. Not hate-filled words. Not fanning flames of frustration and distrust.

And certainly not encouraging another civil war in America.

Van Jones effectively used, in my humble opinion, Sugar Tongue. And it started with his honest intent to encourage folks to really see each other beyond labels, zip codes and party affiliations. To help them slow down so they could hear themselves and others. To create mutual respect and understanding that can take hold and last well after Election Day ends.

My hope is that more of us can follow Van’s example in the days, weeks, and months ahead. This presidential election has showcased the worst parts of us as a nation. Now, more than ever, we all need to use a heckuva lot more Sugar Tongue. Not just on our jobs, or in our homes, or in our places of worship. We need to do so everywhere we go, in order to operate and co-exist as human beings. It’s not a sign of weakness to do so; rather, it’s a true sign of strength.

Whatever the outcome of the election, we have a lot of work to do with and for each other. All of us.

Your Turn: What will it take for us to move forward together after this year’s election?